into our home at Pazzo di Vino! 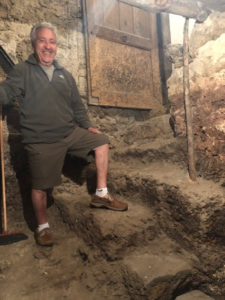 After a move to America in the late 1950’s, what started as a way of life for the DiVito family became a tradition. As a young, first-generation Italian-American, Lorenzo DiVito would head to small pop-up wine grape markets with his father (Lorenzo Sr.) each September with excitement – the grapes were finally here! These markets were scattered about the city of Chicago to serve mostly the local Italian community, with one enterprising person securing a refrigerated truck load or a rail car stacked to the top with grapes from California. Italians would come from all over to load up their trucks and cars with the precious cargo of grapes, and the jostling for the best grapes would begin. Once the DiVito “harvest” was secured, it was on to the crush!

The crush was always a party at the DiVito house, because it took a lot of people to move the grapes around. And of course, after the crush, all those people were hungry (and just a bit thirsty, too!). That’s when Mamma DiVito took over, and somehow managed to feed anyone who walked through the door.  Lorenzo Sr. would normally go to the cellar and take out a dusty bottle from a particularly tasty vintage, and talk about the memories of that year, or of sometime long ago when he was a boy in Italy, or his route to America (though Venezuela) as a young man,

In those post-crush dinners, Lorenzo Sr. would often describe how, in “the Old Country”, they would harvest the grapes, carry them into the cellar, and toss them into a vat carved into the FLOOR, out of the living rock. Once in a while, they would jump in and stomp the grapes (the kids would, anyway!), and then throw in more of the harvest. Once full, they would let nature take over, and the fermentation would begin. After fermentation was complete, they would climb some steps carved into the same rock next to the vat that ended in a small room where you could drain the new wine, and scoop out the remaining must to press out the remaining juice. (No, really. Check out these photos of the set-up, with Lorenzo Sr. on the steps he climbed loaded with grape skins as a boy!).

As they were draining the vat or pressing the skins, they would haul up the wine by hand, one bucket at a time, and fill a nearby barrel. There the wine would rest until it was ready to drink. The dry grape skins would be hauled up and used to fertilize the land (sustainable organic farming before it was chic!). The enormous effort required to accomplish this work was driven by the passion that drives Pazzo today – the pursuit of delicious wine to share with dear friends and family.

With decades of winemaking experience behind him, Lorenzo has not only continued his family’s tradition with his own children, but also extended it to his closest friends. Crushing grapes with his friends and family, and sharing nature’s ultimate bounty, Lorenzo has found no greater joy than making great wines to share. And it was in these moments Lorenzo got his inspiration for Pazzo di Vino.

Whether it is in our tasting room, on our extensive patio, in our lounge, for a private event, or as part of our Wine Club, at Pazzo di Vino, we promise you crazy good wine and a crazy good time!